This is in many ways, the story of a button.

The buttons which we stumbled upon in Sham Shui Po that winter (almost a year ago now) was very much the source of the inspiration.

The Steampunk Coat went through various paper incarnations and two prototypes, but in essence it was a coat built around this brass button.

The first sketch of the coat I managed to dig out of an old, rather knackered notebook. It's drawn with many of the features that the coat doesn't now come with, like the two pocket watches. The elbow patches never made it past this sketch to even the first prototype. Many of the more fiddly aspects also got dropped, as well as the original colour scheme. 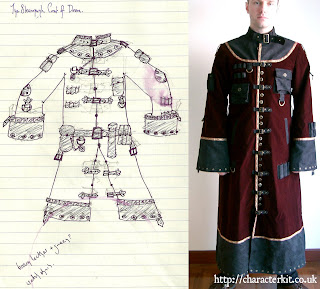