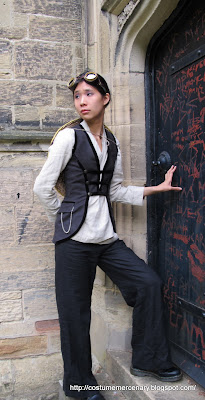 I'm hesitating again at the word Victoriental, because I really dislike the sound of it, but its specificity does apply in this case. The character in these shots does come across to me as an oriental traveller wandering through a Victorian steampunk world.

Instead of one garment that contains both Victorian and Chinese design elements (unlike the Buckle Cheongsam), we merely had me wear garments from both cultures in one outfit. It's not exactly the most sophisticated, original or ambitious method, but at this point we were mostly just playing around with ideas.

The model is wearing beige linen Ru (襦) and black linen Ku (褲) under a high-waisted Regency-inspired waistcoat. The waistcoat has brass compass buttons and is made from black suede. It is trimmed with black silk velvet. The model is also wearing the beer goggles and a rice hat (it has other names, but this being ricepunk, how could I really use any other?) She also has a pocketwatch in her waistcoat pocket, the silver chain of which is visible. 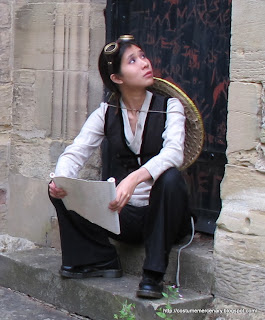 The Designer is remarkably proud of his ability to coax me into looking wistfully into the distance. I believe he was hoping the scratched on graffiti of the door would look a little like esoteric runes at a cursory glance, but I'm not sure it entirely works. The scroll, unsurprisingly, is the same takeaway calendar as the one seen with the Wuxia Scholar. I like to imagine that it's a map or directions the character is following. She comes across as a little uncertain about her location, but by no means overwhelmed by her circumstances.

To commission a similar outfit from the Mercenary would cost in the region of £80-90. 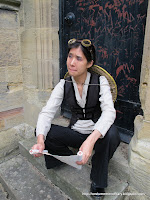 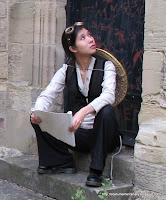