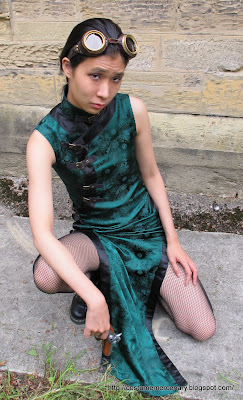 The Buckle Cheongsam was rather more ambitious than the Ricepunk Wanderer outfit posted a few days ago, but the idea was simple: it takes design elements from the classical and rather iconic cheongsam (also known as a mandarin gown) and adds buckles to it.

The original mandarin gown was wide and loose-fitting, worn layered over many other garments. It had long sleeves and modestly concealed all contours of the body. The high slits originally came from ones designed to enable the wearer to ride. The sleek modern version which not a smudge of the original silhouette is said to be developed during the turn of the century in Shanghai (still known today to produce the best tailors in all of China). It's widely available today in numerous colours of brocades and varying degrees of garishness.

This buckled permutation of the cheongsam is made from emerald green faux silk brocade in a very oriental pattern - a choice that the Designer felt was a strange one since Chinese garments are classically red, but I thought a little more foreign influence on the colour scheme was a good idea at the time. The garment is lined and edged in a black stretch silk and fastened with square brass buckles.

There are a handful of "sexier" shots where the cheongsam is worn without the black linen Ku (褲). Also appearing are the brass beer goggles, an opium pipe from a joke shop (originally bought as a phys-rep for an unrelated live roleplay system), a derringer from Makai-larp and a rice hat.

The dragon lady undercurrent of these photos made them quite difficult to do for me. It's not that the stereotype still looms large in my life and that casting myself in the role distresses me, it's more that it's a lot to live up to and project. I'm not sure I look the part of the enigmatically deceitful and domineering dragoness. In rather stark contrast, the Ricepunk Wanderer was a pleasure to shoot and I was significantly more comfortable in the role.

To commission a similar garment from the Mercenary would cost in the region of £75-85. 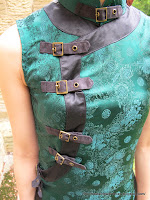