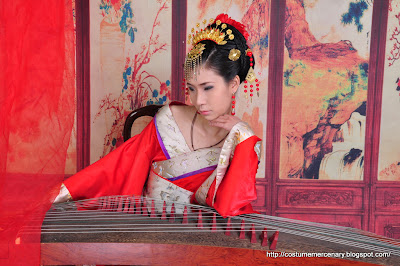 If she turned her head and smiled she cast a deep spell, Beauties of Six Palaces vanished into nothing.
Hair’s cloud, pale skin, shimmer of gold moving,
Flowered curtains protected on cool spring evenings.
Those nights were too short. That sun too quick in rising.

The emperor neglected the world from that moment,
Lavished his time on her in endless enjoyment.
She was his springtime mistress, and his midnight tyrant.
Though there were three thousand ladies all of great beauty,
All his gifts were devoted to one person.

Yang Yuhuan, more commonly known by her title Yang Guifei (Imperial Consort Yang), is thought to be one of the four most beautiful women in Chinese history. She was, of course, so beautiful that it was a curse. Both sides of the rebellion believed her to the root cause of the Emperor's negligence and the loyalists demanded her execution. The Emperor ordered that she be taken to a Buddhist shrine and strangled to death.* 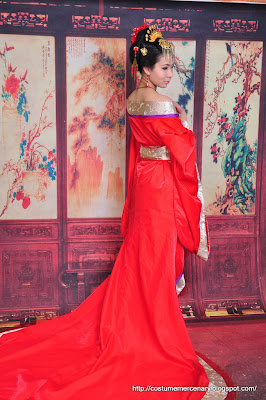 She was first married to a prince, one of Emperor Xuanzong's many sons. There various stories about how she came into the Emperor's favour, but she did and was eventually made imperial consort through a ruse that involved her briefly becoming a Taoist nun (thereby voiding her first marriage).

Like many famous female figures of folklores, there's an uncomfortable aftertaste of sexism that comes with her story. It can be said that her story revolves around the trope Love Ruins the Realm (warning: tvtropes link) for not only is she responsible for a rebellion, it also marks the beginning of the Tang dynasty's downfall. But it isn't just Love that ruins the Realm, it's the woman. It is a theme that threads through Chinese folklore: Red Dye Ruins Water.

For it is women that causes the downfall of monarchs and nations: the Emperor, wallowing in the pleasures of the flesh, gives in to her frivolous demands (famously the lychees were relayed to the capital from Guangzhou) and allow her corrupt relatives free reign at court.

Most of stories I know present her as hopelessly tragic, fatefully cursed and politically naive. She is both the root cause of the Tang dynasty's downfall and yet without true agency its cause. It is not her ambitions or her scheming that tears apart the Imperial court, but simply her transcendent, immortal beauty. She is more analogous to Helen of Troy than a true femme fatale. 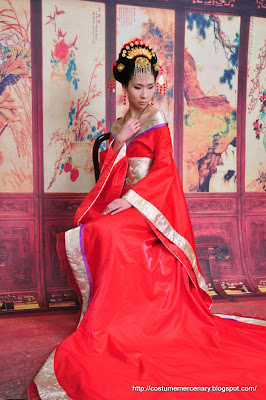 As almost synonymous with beauty, Yang Guifei is also interesting for the fact that she is often held to be plump. She is alluded to in the saying about differing standards of beauty, often contrasted with Zhao Feiyan, who was said to be very slender. (Which of course, makes this a terrible cosplay of her. But there are only so many historical women who have distinctive outfits.) The way she is talked about, the way her alleged beauty is described (and sometimes discredited) is especially interesting given the various pressures on Asian women to be skinny.

Numerous poems, books, films and so forth have been inspired directly and indirectly by her. Tale of Genji, regarded by some as the first novel written by a woman, was inspired by The Song of Everlasting Sorrow (partially quoted above). Various sumptuously costumed tv series are linked to here. There is even a musical, named Sacrifice, though I feel rather ambivalent about their understanding of the story: "Ultimately the message is simple; true love means sacrifice. [...] This great story enticed three western authors to China, intoxicated by its exoticism. What they found is the perfect vehicle for drawing west and east together; a transcendent love story that is, in fact, universal."

The costume comes in three layers, though only the scarlet outer robe is really visible. The hair is not a wig, though only a portion of it is my own. The shape of the train is what makes this costume really dramatic, with the sheer expanse of red. Tang dynasty costume was very much about a high waistline, enormous flowing sleeves and long, long skirts. At one point, the skirts actually started above the breasts.

Since we've also been on the subject of costumes for Empire LRP of late, it seems worth mentioning that the shape and flow of these robes would make for good Urizen costumes, though certainly not the colours. The red is far, far too bright for the pastel-loving spire-dwellers. The use of brocade as trim has potential, but only if it were very muted in its pattern.

The full story behind these photos was told in the preview post and the other photos from that day can be found filed under Xiaolongnu. A set of robes like these can be commissioned from the Mercenary and would likely cost between £50-150, depending on number of layers and choice of materials.

* The version I remember as a child was that he issued her with some dozen metres of red silk - a roundabout way of telling her to hang herself.