The steampunk magistrate consists of a real silk surcoat (or chao pao, 朝袍, literally "dynasty robe") and a hand-embroidered rank badge (also known as a "mandarin square"). The surcoat is fully lined, edged in a slightly lighter shade of green and has engraved jade buttons and side pockets hidden in the seams. The mandarin necklace Jha has made herself.


The outfit was designed for Jha's steampunk persona, a Qing Dynasty colonial magistrate hot on the heels of opium smugglers. She was hoping to introduce education about the Opium Wars to steampunk events and was planning her character around it.

More photos and discussion of the steampunk magistrate outfit under the cut. 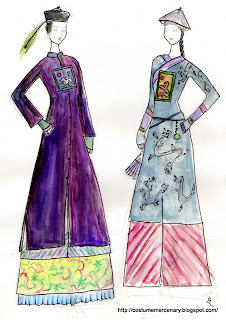 In the original sketch, the lady on the left is wearing a chaofu (or pufu), the blue/purple-black gown that was introduced as a sort of uniform for all mandarins in 1759. It's made in silk satin traditionally. It's unlined for summer, lined in cotton for autumn and spring, lined in fur (or just trimmed) during winter. We went for a dark green for the robe in the end as Jha's character is based in Malaya, which was Muslim by the time of the Qing Dynasty, and green is a very Islamic colour.

Pufu with larger sleeves also existed, mostly so that things like sleeve edition books and small dogs can be kept in them. It was tempting, but slimmer did mean more manoeuvrability and Jha had wanted a persona who would "move around a lot." 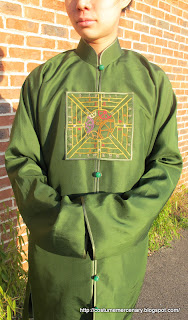 The lady on the right in the concept sketch is wearing a very loose interpretation of a qifu. Those are meant to be dragons (I know, not very convincing). There's quite a lot of symbolism layered into the garment, but the take away point is that before the pufu was introduced, the square would just be pinned onto this much busier robe. It'd be rather more expensive and the embroidered square gets a little lost in it.

The outfit as it is has been rather pared down from its historical ancestor. We have neither the piling collar (though the idea of one with a serrated, cog-edge does still appeal) or even the more elaborate underlayers of court robes (usually of brocade and satin, with heavily embroidered panels). 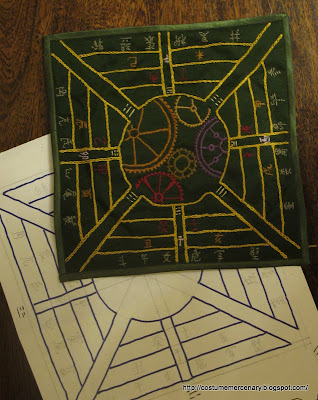 Most of the interesting symbolism is happening on the rank badge, in which we opted out of the traditional iconography of the various ranked animals and went for a complete metaphor. We had the idea that if we were in a China that idealised the mechanisms and the mechanical/logical workings of machines, we can extrapolate that the symbolism of animals may be replaced with cogs and gears of various sorts. Such that the mandarin, whilst wearing it, exemplifies the virtues of the machine and is part of the great machinery that is the Imperial Bureaucracy. This is to be mirror the "schematic diagram of the universe" of the qifu.*

The badge design is based off the bearings of the Han dynasty compass (the magistrates are the guides of the Empire) with interlocking cogs in the centre of it (done in cotton DMC thread).

To commission a similar outfit from the Mercenary, drop her an email.

* "The qifu is a schematic diagram of the universe... the lower border of diagonal bands and rounded billows represents water; at the four axes of the coat, the cardinal points, rise prism-shaped rocks symbolising the earth mountain. Above is the cloud-filled firmament against which dragons, the symbols of imperial authority, coil and twist. The symbolism is complete only when the coat is worn. The human body becomes the world axis; the neck opening, the gate of heaven or apex of the universe, separates the material world of the coat from the realm of the spiritual represented by the wearer's head" (Volmer
1977)